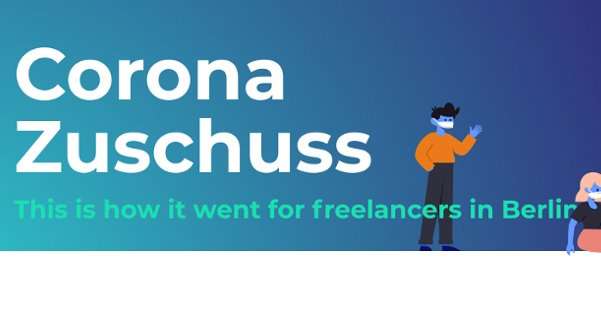 Not only has Germany reacted fast in curving the public health hazards of COVID-19, it has also been quick to support vital components of the local and national economy. Public authorities across the country have broken very German traits and habits by forgetting budget balancing golden rules and making sure all actors, big and small, receive emergency funds until the economy kickstarts again.

Berlin is no exception to the rule. In record-time, Berlin setup a straightforward application process, under IBB guidance, to help freelancers and small-companies out-there.

On 27/03 at 13h, this tweet launched an unprecedented frenzy of applications from nearly 400 000 applicants within 24h

The scale with which this support mechanism was conceived & implemented is simply unheard of, and a far cry from what everyone would expect from German bureaucracy. The general sigh of relief and overall enthusiasm was shared among friends, social media and reported in the media too. But how unGerman was this whole thing exactly?

Asking around self-employed friends, it became evident that this was defying everybody’s expectations.

This made me curious and wanting to dig deeper. How was everybody’s experience? To that purpose, i published a poll online to gather a few data points.

Here are some learnings. If you are in a hurry, you can get the quick facts hereunder and/or read on for details.

2- Respondents had to wait 1,5 days in the queue on average before applying,

3- 71,6% of respondents received support funds in less than 2 business days.

5- Most respondents praised the user-friendly and speedy approach, but were often unsure about terms and conditions of the program.

6- Majority of respondents queued, applied and received funds within the same 4-days window.

This poll was focusing on so called “solo” freelancers, even though the Corona Zuschuss was open to companies as well. In this poll, the trend stayed the same throughout: most respondents were Freiberufler. This seems to reflect the broader population, as Berlin is concentrating creative and cultural industries, which are often falling under the Frei Beruf category.

Also note that the respondents were reached via channels used by expats primarily (like this blog), so it’s likely to be impacting too.

If you talked to people around you, there were a lot of complains about the queuing system. It was put in place to make sure that the IBB’s servers won’t crash. I thought that given the short time frame and the insane demand, the IBB did well. Still, even with this measure in place, only half the people had a flawless experience:

For 25% of the sample, the application went through, but it some issues like, the form not loading/displaying when the user’s number was up,accessing the unique URL multiple times or submitting data multiple times to make it work.

More troubling was for the people who had to take a new number entirely because of server timeouts. This was particularly frustrating if you took a number close to the switch from Berlin funds to federal funds (first week for April), as crucially, this means you lost the chance to receive support money to use for personal expenses.

It was fast, but how fast?

Surprisingly, a small minority did not in the end qualify to receive support money. The approach rather seemed like “apply now, the IBB will check later” for the sake of speed. Evidently, that worked for most as 88,5% of respondents said they did receive the money.

The IBB promessed to transfer the money within 3 working days after the application has been received. They certainly held this side of the bargain! The research suggests that most applicants got their money less than 2 business days after they applied. A few applicants mentioned they received the transfer on the same day!

All in all, a majority of respondents applied and received the Zuschuss within the same 4 business days window.

An open ended answer field allowed applicants to leave qualitative feedback on their experience. This is a summary.

Respondents to this poll repeatedly pointed out the ever-changing nature of information available to Zuschuss applicants. The fact that the FAQ section on IBB’s website arrived several days later after the launch of the application program caused a lot of confusion. Applicants mentioned the following:

To be fair, some of this feedback could in theory be attributed to the lack of understanding of bureaucratic- German in the fine prints of the form, but even then, this information should be made more obvious and accessible before the application even begins. That took time to materialize.

Like others, i tried to answer some of those questions in a post dedicated to the Corona crisis, with some success, but the questions on FB and between friends kept flowing in.

On top of it all, the rules for qualifying changed in the beginning of April, adding up to the confusion.

Too good to be true: is this really Germany?

The other big theme to come out from application is obviously how friction-less the process was. A lot of applicants praised the IBB for putting the queuing system so fast, and processing applications at a great speed, and in bulk.

Other were left positively surprised and alienated by the whole thing and simply wished every interaction with German administrations could be made that user-friendly, fast and 100% digital.

This needs to be confirmed with a larger data sample, but one applicant mentioned that their information was made available to another applicant, when the latter got the end of the process. This would represent a pretty serious data breach across completely different sessions if it was confirmed.

About the methodology & statistical significance:

Let’s talk about the elephant in the room. Sure, 104 responses is not a lot to go by; it represents only 0,052% of the 200 000 successful applications so far. It does not allow to establish definite answers and trends. It’s only a little probe into the data set. I will leave to the IBB the need to establish statistical significance with the endless supply of email addresses they have, provided their data privacy policy allows it.

The lack of responses can also be attributed to the very niche nature of the topic, people already being bombarded with requests for polls and probably the “not my priority” parameter too. Nevertheless, it’s an early look into this unique event, until there is better data to work with.

Thanks to all the respondents who took the time to answer in those busy times.

Thanks to the following partners which broadcast the poll to their own networks as well.

If you have been reading this far (thank you for that), it means that you were interested to know how this unique event went for everybody. Do you care to leave a comment and reflect on this impacted you? How did you experience the application? Do you think such events can impact German’s approach to bureaucracy in the long-term? Any comments about methodology?

© 2020 - Settle in Berlin. All Rights Reserved. Made with in Berlin