If you are just out of a WG into your own home, or simply just signed a contract as the main tenant, there are several things on your to-do list right now. One of the items on the list should be to set-up a contract with a german electricity supplier (just below “buying a sweet sweet couch“).

If this your first time dealing with that sort of thing, like it was for me a few years ago, i thought a little intro on the topic could help you pick a better contract and save you hundreds of euros. Here goes. 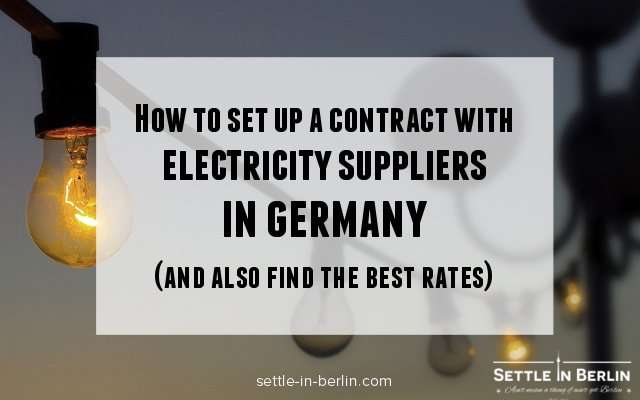 How to set up a contract with a german electricity supplier

First off, let me reassure if you are in the midst of moving all your stuff and completely forgot to open an account with a energy supplier in Germany. You will still have access to electricity in your new place. They don’t just cut the power when the previous tenant has left the place. Being late in opening an account with a german electricity supplier ist not a big deal. Simply state when you moved in, and you will have to pay whatever was used since then.

Otherwise, the process leading to a contract with an electricity provider in Germany is fairly similar to signing up for internet or for a car insurance. It is quite simple. Here is how to get the cheapest offers.

If your German is a bit scruffy, there is a little list of words you might encounter during that process to help you fill everything in correctly at the end of this article. Usually, your new provider will make the switch for you and notice your previous supplier about the new contract.

Leading electricity suppliers in Germany are Vattenfall, E.ON, Lekker Energie, RWE, Yellow Strom & MVV. The market is very fragmented so you might encounter other names during your search. Those other companies are also fine but it has happened that some of them went bankrupted because of cash flow issues, losing their customers money for the people that had paid in advance. That’s why it’s important to make that you are picking a contract where bills are paid monthly or quarterly.

As a way to attract new customers in, many german energy suppliers in Germany will try to seduce you with 2 arguments: new contract bonuses & price guarantees.

This one is fairly common and can also be found in other sectors such as banking for example. Very simply put; they give you money when you become their customers. The idea is that even though they lose a little bit of money short-term, you customer lifetime value will offset that little amount. Although it can sometimes be very alluring to be given 100€ “for free” just to open a new contract, i would focus my selection criteria on other aspects of the service, especially the long-term costs.

Also be aware that this bonus usually only comes with the first bill. In other words, it’s more of a discount than cash in your hands.

This argument is much more interesting from a customer point of view. We all know that the prices for electricity fluctuates a lot and tends over time to increase by a fair margin. This is due to investment in renewable energies, sharp demand and also the fact there is really no choice; electricity is vital for all of us. German electricity suppliers will then offer you a price guarantee over a certain period of time, during which there will be no increase in price paid per Kwh. This period of time usually varies between 2 or 3 years.

What if i don’t know which german electricity supplier i have currently?

If you just moved in, the previous tenant took their contract with them when moving out. If you don’t take any further action, you will receive a letter from Vattenfall, which the supplier by default in Berlin. That’s why many people have Vattenfall and there is nothing wrong is that. However, electricity rates are often cheaper with competition especially with price guarantees & bonuses. If you are outside of Berlin, check which company might be the default german electricity supplier in your region. Many expats don’t bother switching supplier, costing them hundred of euros.

Some fine prints to pay attention to when picking your contract

PS 2 : You might to have communicate the number of your electricity meter corresponding to your home to your german electricity supplier. It is usually located in your cellar. Ask to see your “Stromzähler” to your Hausverwaltung or Hausmeister.