Expats and locals alike have been experiencing the increasingly difficult challenge to find accommodation in Berlin the last few years, especially in the more central and trendy areas of the German capital. Alongside topics like gentrification & start-ups, housing capacity shortage has been in everyone’s conversations, which naturally lead to question the impact of short-term rental platforms like airbnb on the current situation. In other terms; how many flats are being repeatedly put for rent by owners as holiday rentals when they could be made available to local long-term tenants?

A first attempt at objectively measuring the extent of the problem in Berlin was made by Studio Karat through their dedicated website: airbnbvsberlin.de. Put together thanks to data provided by the platform itself, this allowed for a data-driven analysis of the situation.

On 01/05/2016, a new law was voted by the city Senate in an effort to limit the effect of such platforms onto the long-term local housing market. Named “Zweckentfremdungsverbot” (law against misappropriation of housing space), this regulation threatens anyone who puts an entire flat* for rent with the intent of generating profit with a fine up to 100 000€ per violation. Any commercial exploitation has to be sanctioned with a special permit from the city. This move received acclaim from many local actors who saw the end of abusive listings. However, since this law passed, we can still see many listings on airbnb up to this date.

It is therefore quite interesting to again have a look at the data today, and the story it tells us: did the new law have the desired effect of reducing unwanted listings?

Studio Karat released another data-driven study on their blog and gives us a few clues on the answer.

An overall decrease in supply

2015 was a great year on the supply side of airbnb’s platform. Within 10 months until January 2016, there was a 68% increase of published listings, showing a great interest from users for the marketplace with around 20 000 listed flats at the end of this period. This impressive growth didn’t last long however, probably thanks to a largely publicized debate leading up to the Senate’s decision to this new ban. From March 2016 on, many users removed their listings preemptively from the platform, probably in order to stay on the safe side of the law before it comes into full effect. Within 2 months, the supply fell by 40% resulting in a level close to early 2015 at around 11 000 published listings. 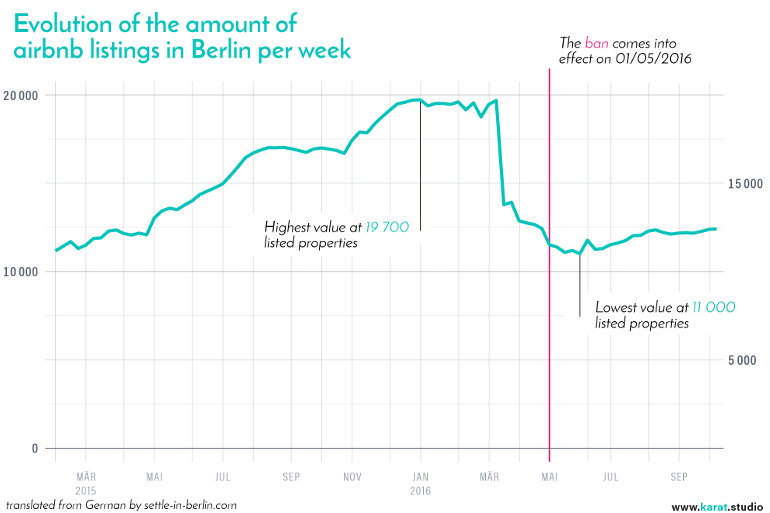 As reported by Zeit magazine (together with Studio Karat), it’s not completely clear how much of that was voluntarily unlisting and how much of it came from airbnb deactivating user accounts.

An unconvincing application of the law

We can observe an incremental increase of new listings since 01/05/2016 leading a total number of 12 400 listed flats in October 2016. This tells us that while the ban successfuly scared away a lot of users shorty before it started, this dissuasion might only fade with time. When the psychological impact of a new law is gone, what is left? The answer to that question is simply how this ban is controlled and applied.

6 months after, there has been only rare instances when sanctions have actually been applied and fines been paid. The unfortunate wording of the law could also be blamed for this; many districts of the city don’t know how to interpret it. Another side effect of the vague wording might be directly connected to users: many of them resumed their activities as they are simply not sure if they are on the right side of the law. In doubt, they re-listed their flats after removing them in the first place.

A drop in commercial listings in favor of home sharers

The initial philosophy of platforms like airbnb has always been to allow private people to rent their houses once in a while in order to make some extra cash when being away for a few days. Those users are called “Home sharers”. They don’t represent a real problem as for most of them, it’s only a moderate and occasional usage. Commercial users** on the other hand take advantage of this marketplace to aggravates the current shortage of long-term accommodation for locals. It is about increasing yield by repeatedly renting their property out for short stays. The ban was mainly aiming at this second group. 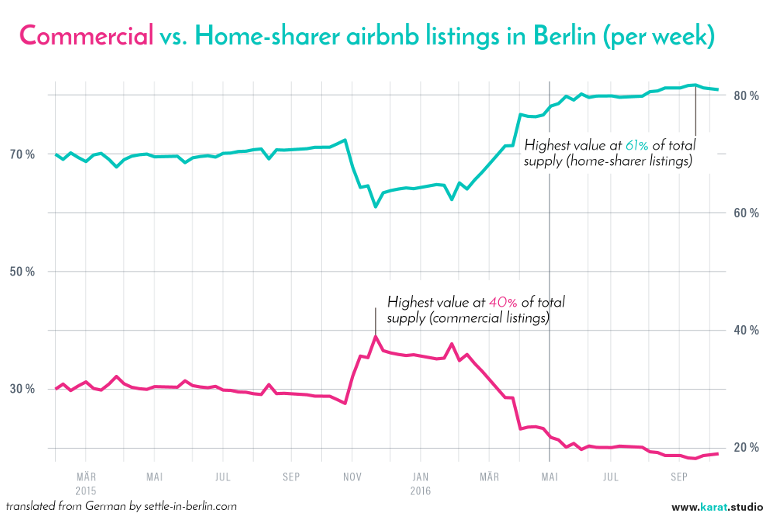 Up until now, it has certainly succeeded there with a significant decrease in commercial listings to only 20% of total listed properties since March 2016, down from 40% a month before.

Will the ban hold long-term?

A mentioned earlier, after the initial fears this ban struck in the heart of airbnb users leading to a positive evolution of the situation, the weak application of the law by public authorities is threatening its long-term impact. It’s not an easy task for the curent mayor but a necessary one if he hopes to achieve more affordable housing in Berlin and mitigate the mistakes made by his predecessor, Klaus Wowereit.

You can find Studio Karat’s original post in German on their blog this way. All credits for graphs goes to them.

* Entire flats= more than 50% of the property. It is still allowed to rent single rooms without any permit.

** Commercial users are defined by users who have more than one property listed on their profiles.

Please note that while the term “airbnb ban” has been used in this post, it is only to use the popular term adopted by most outlets. It also naturally concerns all platforms with the same business model. However, the data presented here was taken from airbnb’s own servers only. One can however infer that this is representative of what’s happening elsewhere (Wimdu, etc).